All year-round use for Cambridge cycle path thanks to environmentally friendly solar lighting.

With bike-friendly city planning, cycle schemes and charity cycle campaigns it’s not surprising that the city of Cambridge is a hub for cycling.

What is more, the city attracts one in three residents opting to choose the pollution-free method of transport to work (Cambridge City Council, 2018)¹.

Coe Fen is a shared footpath in the east of the city and a key off-road cycling commuter route into the centre of the city. Designated as a city wildlife site in 1996, Coe Fen is home to many bat species including Common Pipistrelle,
Soprano Pipistrelle, Daubenton’s; Noctule, Serotine; Brown long-eared bats.

Over a hundred environmentally low cost solar-powered studs were installed across Coe Fen on the pathway.

The schemes purpose was to improve facilities for cyclists and pedestrians on Coe Fen public right of way. The need for wayfinding light whilst providing delineation for public safety and increasing usability had been recognised.

So, considering the presence of bats and other nocturnal animals’ any disturbance of the historic, unique and natural landscape was required to have a strong justification particularly as there are several interest groups and individuals who make
every effort to ensure the natural environs are protected in Cambridge.
Cambridge City Council therefore needed to ensure that the measures to improve cycling commuter route infrastructure safety and wayfinding were sensitive to the environmental circumstances of the city.
The solareye®80 product was chosen as the solution as it avoids high levels of light spill that could affect nocturnal animals, whilst providing a low cost renewably sourced level of light for the commuter shared use footpath through Coe Fen.

solareye®80 is an energy efficient solar stud, helping to aid safety requirements by providing 360° visibility that is strong enough to provide wayfinding light along cycle tracks and pedestrian footpaths at night.

The solar stud has been aesthetically designed in the UK, it is constructed from a robust engineering grade polymer built to last at least 8 years. Pedestrians and cyclists can move over the durable light stud with ease with no impact to the light source.

Efforts were made to ensure that the lighting does not disturb the bats unduly for example by leaving a dark area across the River Cam one of the main bat feeding corridors. Each solar stud was fitted with a ‘bat hat’ designed to reduce the upward light spillage, reducing further potential impact on wildlife.

Illuminating Coe Fen has helped pave the way for cyclists and pedestrians whilst reducing public safety concerns. Installing the solar studs has opened the path for year-round use thereby helping to encourage more people to use the public right of way at night.

“Due to the success of the installed stud lighting through Coe Fen; solar stud lighting with bat hat protection has become the method with greatest community backing for schemes in similar environments across the city.

As a consequence of the Coe Fen project a further 250m of solar lighting has now been extended along the route bringing the length of wayfinding lighting along this route to well-over 1km.”

Want to find out more?

Full brief can be downloaded here

If you have an area that requires night time delineation, installation of the solareye®80 is:

Want to discuss a project in more detail? 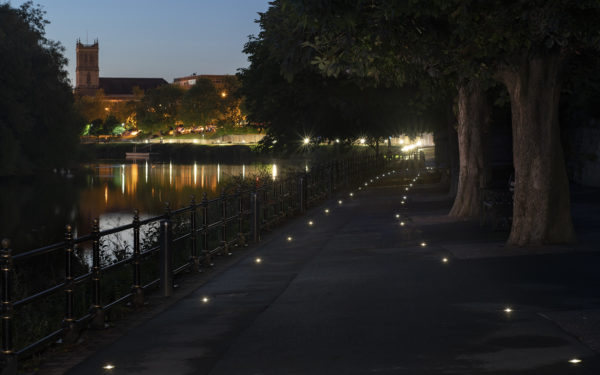 Next Article
Back to Top
The second path on the other side of the canal has a fence one side and a high wall the other meaning even more shade! Lakeside themselves were not convinced that the units would get anywhere near enough daylight to be able to function at all but lo and behold they are also working perfectly! A great solution for paths that desperately needed lighting but with no option for hard wiring – we have managed it. The next project will involve extending the installation down the full length of the canal path which is about 7km long.
Please follow and like us:

Solareye®80 Customer
View Testimonials
The first path was quite narrow, next to a canal with tall trees on one side so there is a fair amount of shade. We weren’t sure if the product would be able to work efficiently with this amount of shade but are delighted to report that this factor has not hindered them in the slightest and they are working perfectly well.
Please follow and like us:

Solareye®80 Customer
View Testimonials
The Solareye80 has provided a valuable solution to a section of a cycle path near to the Create Centre – a well used path by commuters in and out of the city – this path was crying out for lighting but to hard-wire would have been too expensive. This simple solution has made such a difference to the path, especially now the evenings are drawing in. We have been studying the performance of the units over the past  6 months and are very impressed.
Please follow and like us: