Here at the Solareye – we love bats! When we learnt that bats & their nocturnal friends often get distracted by the upwards light spillage from artificial ground lighting, we decided to design a friendlier option for conservation sensitive areas. And thus the Bat Hat was born!

What is the Bat Hat?

As well as being detrimental to bats, artificial light also disturbs invertebrate feeding, breeding & movement which may reduce and fragment populations due to the disruptive natural patterns of light and dark caused by artificial lighting.

A number of our British mammals are nocturnal and have adapted their lifestyle so that they are active in the dark in order to avoid predators. Artificial illumination of the areas in which these mammals are active and foraging is likely to be disturbing to their nocturnal activities and their foraging areas could be lost in this way. It is thought that the most pronounced effect is likely to be on small mammals due to their need to avoid predators. However, this in itself has a knock-on effect on those predators.

The detrimental effect of artificial lighting is most clearly seen in bats. Our resident bat species have all suffered dramatic reductions in their numbers in the past century. Light falling on a bat roost exit point, regardless of species, will at least delay bats from emerging, which shortens the amount of time available to them for foraging.

As the main peak of nocturnal insect abundance occurs at and soon after dusk, a delay in emergence means this vital time for feeding is missed. At worst, the bats may feel compelled to abandon the roost. Bats are faithful to their roosts over many years and disturbance of this sort can have a significant effect on the future of the colony. It is likely to be deemed a breach of the natural and European legislation that protects British bats and their roosts.

In addition to causing disturbance to bats at the roost, artificial lighting can also affect the feeding behaviour of bats and their use of commuting routes. There are two aspects to this: one is the attraction that short wave length light (UV and Blue light) has to a range of insects; the other is the presence of lit conditions.

Whilst we are very proud of the brightness and omni-directionality of our standard product – we were keen to create an alternative for conservation areas so that Bats and other wildlife that may be affected, would not be disturbed. 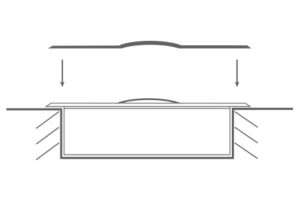 We re-engineered the standard product by adding a little hat to reduce the upwards light spillage by around 98% whilst remaining the same in profile, making the ‘Bat Hat’ a far friendlier option.

Perfect for conservation sensitive areas or dark sky reserves, our delineator won’t give off unwanted light fields or interfere with our little nocturnal friends.

The Solareye Bat Hat maintains the same profile as the Solareye80 but reduces upward light spillage by over 95 per cent. This video demonstrates the profiles.

We’ve learnt a lot about bats during the development of our ‘Bat Hat’ – here are some interesting facts that we would like to share with you.

In addition to causing disturbance to bats in the roost, artificial lighting can also affect the feeding behaviour of bats. In most bat species there is an evening period of activity followed by another at dawn. These two flights correlate with the peak flight times of nocturnal insect prey. Insects are attracted to light particularly if it is a single light source in a dark area.

Artificial lighting can increase chances of predation. It is believed that Plecotus & Myotis species shun bright light as a predator avoidance strategy. Many avian hunters will hunt bats which may be one reason why bats avoid flying during the day.

Any upwards light spillage should be minimal to avoid light pollution. Light can be restricted to selected areas by fitting hoods which direct the light below the horizontal plane, preferably at an angle less than 70 degrees.

Our ‘Bat Hat’ reduces the upwards light spillage of our omni directional LED by around 98% while remaining the same in profile. This means that you will still be able to see it, but it won’t bother the bats and insects as they fly overhead.

The Bat Conservation Trust have kindly agreed to help us evaluate the ‘Bat Hat’ in real situations with surveys showing there has been no disruption to the Bats by having these units installed near their colonies. We thank them for giving up their time to advise us with the development and testing and look forward to continually develop our conservation range.

Please fill out the following form to receive lighting level diagrams and a LDT file for DIAlux.

Back to Top
A great solution for paths that desperately need lighting but with no option for hard wiring.
Solareye Customer
View Testimonials
The path is quite narrow, next to a canal with tall trees on one side so we weren’t sure if the lights would be able to work efficiently with this amount of shade but are delighted to report that this factor has not hindered them in the slightest and they are working perfectly well.
Solareye Customer
View Testimonials
The Solareye80 has provided a valuable solution to a section of a cycle path near to the Create Centre – a well used path by commuters in and out of the city – this path was crying out for lighting but to hard-wire would have been too expensive. This simple solution has made such a difference to the path, especially now the evenings are drawing in. We have been studying the performance of the units over the past 6 months and are very impressed.
Solareye Customer
View Testimonials