Lakeside Group is helping the Province of East – Flanders achieve their aim of providing safe and comfortable cycling tracks as an alternative to travelling via busy road networks. Two cycle tracks formed part of the overall project, a cycle highway in Kluisbergen, and a cycle path in Ronse which crossed a European protected habitat area. Both cycle paths form part of the network of cycle highways and therefore needed to meet the standards of a cycle highway.

The cycle highway in Kluisbergen was once a former railroad but became abandoned many years ago and has now been developed into a beautiful natural area. The cycle highway which follows the old railroad track is situated next to the natural area, in an open field. The provincial government wanted a lighting solution that would guide cyclists through bends and outline the path without impacting the local wildlife and biodiversity. The area needed to keep its natural
character, so traditional street lighting wasn’t an option.

Ronse in Belgium needed a lighting solution for their cycle path that was energy-efficient, low maintenance and provided an output that was not harmful to the local biodiversity. The path crossed a European protected habitat area, so streetlights were not allowed or even wanted.

Balancing the need for light without being a nuisance to the local environment is a growing concern amongst lighting professionals. At Lakeside Group, many years ago, we came up with a solution of creating an outdoor solar light that had minimal effect on conservation sensitive areas and called it the “bat hat”. Our environmentally friendly solar light is part of our solareye®80 range – solar ground lights that are entirely reliant on the sun and therefore require no electricity, keeping costs lower. 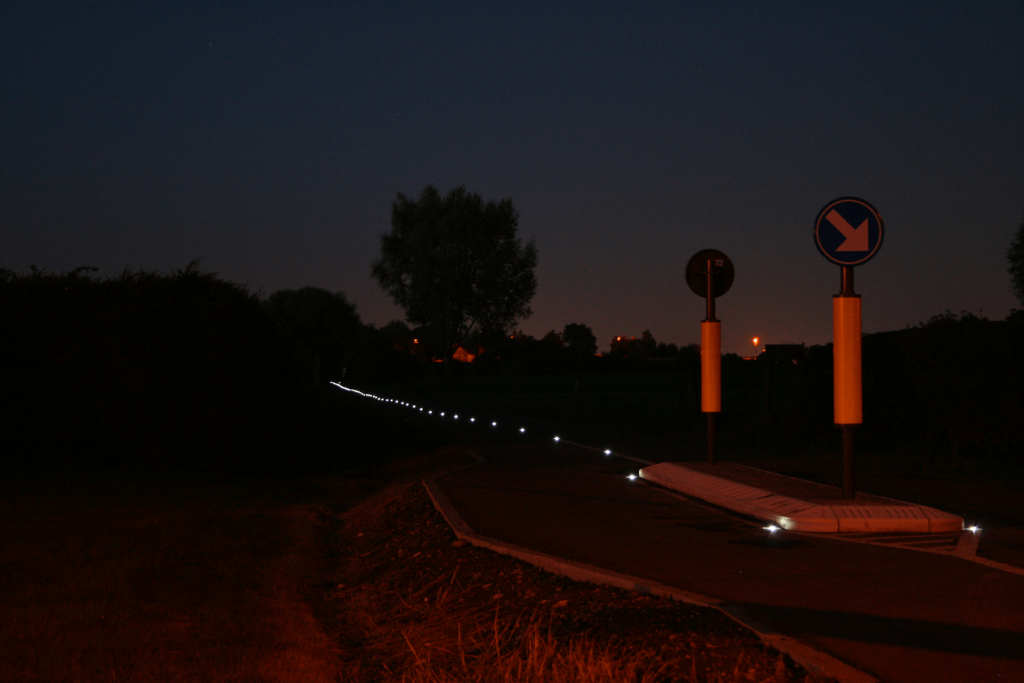 The provincial government recognised the need to guide cyclists on the path, but they didn’t want a lighting scheme that would affect the natural environment, nor could they warrant the cost or highly disruptive groundworks of external/mains connected lighting. All the lighting products that the council trialled didn’t seem to meet with their needs, they were either too expensive or featured low-quality components. The Local Authority wanted a solution that would save on running costs and reduce their carbon footprint without costing a significant amount to install. Furthermore, the cycle path in Ronse followed an old railroad which was due to be refurbished and made wider to meet the cycle highway standards. However, part of the path crosses a European Protected Habitat area and recordings indicated that a rare species of salamander (fire salamander) were present and using the path at night during the breeding season. The provincial government wanted a cost-effective lighting solution that could guide cyclists on the paths at night without harming the local habitat. Part of the path was situated in dense forest area and so there were concerns that solar lighting may not be a viable option given that solar is heavily reliant on daylight. 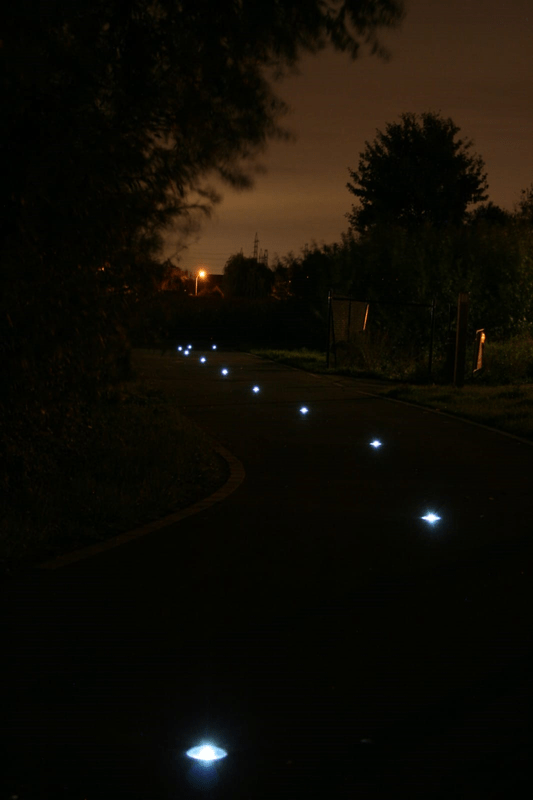 At Lakeside Group, through their solareye®80 product range they are at the cutting edge of the outdoor solar lighting market, with their products providing valuable solutions to councils, properties and commercial buildings across the world.

The provincial government approached Lakeside Group about their solareye®80 product, having met with them at Velo City an International Cycling exhibition.

Initially, Lakeside Group offered 4 types of solareye®80 solar lights to try as a test project to help the council decide which product best met with their requirements. Importantly, a trial helped to monitor the protected habitat area in Ronse, home to the rare salamanders.

At the site in Kluisbergen, the council selected a 1.4km path to install solareye80 along, to gain various feedback from users and stakeholders.

For the site in Ronse, the council decided to purchase 20 conservation-friendly Bat Hat’s, a solar ground light that has been designed to reduce upward light spillage by over 95 per cent. Of the 20 Bat Hats, 10 were fitted with a high capacity battery, this was crucial given the site in Ronse had a dense tree canopy. The council also purchased 20 standard solareye®80’s and again 10 of them were fitted with a high capacity battery. This gave a broad range of lighting options to trial and its effect on the rare salamanders.

“Lakeside Group has provided us with an affordable lighting solution without compromising on quality. The new solar ground lights have enhanced people’s feelings of safety and security at night, without any harm to the natural environment. When describing the installation process, Mieke Dries, Cycle Highway Engineer at the provincial government, said: “The installation went faster than expected and the cycling path was accessible yet safe at all times throughout the process.”

The province found solareye®80 to be extremely cost effective when they added the savings they would make over the years of service. Installation of the lights was straightforward and with batteries charged directly by the sun, there is no need for any digging, trenching or wiring like other traditional lighting schemes. And of course, being off grid means the council has no energy costs whatsoever during the entire lifespan of their solar lighting system.

Whilst the benefits of low installation costs and maintenance savings were important to the provincial government, their main concern was the impact new lighting would have on the natural environment. The key difference in solareye®80 compared to other solar lighting products is that Lakeside Group can fit each solar Stud with a Bat Hat – reducing the upward light spillage and potential impact on landscapes and nature.

The advance in technology over recent years has meant that the LFP batteries within the solareye®80 ground light is anticipated to last at least 8 years, reducing the need to constantly replace and dispose of old lights. Solareye®80 is therefore incredibly energy efficient, requiring a minimum amount of charge to produce a warm light capable of guiding the way, even on the darkest of paths. Now cyclists and other path users can navigate the track with the advantage of giving them a greater feeling of safety and security.

“We’re very proud of our new solar lights and believe the range of products offered by Lakeside Group means that there’s a suitable product that can meet the needs and requirements of almost any situation. They’ve been very cost-effective”

The reactions to the new solar lights have been positive, so much so, that people are interested in installing solareye®80 in other situations and applications.
Beautiful lights that make cycling in natural areas a new experience.” 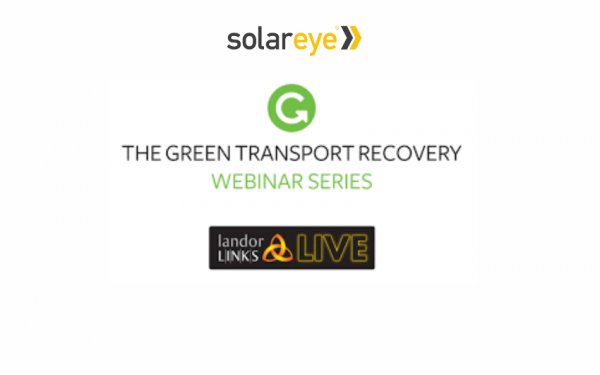 Next Article
Back to Top
A great solution for paths that desperately need lighting but with no option for hard wiring.
Solareye Customer
View Testimonials
The path is quite narrow, next to a canal with tall trees on one side so we weren’t sure if the lights would be able to work efficiently with this amount of shade but are delighted to report that this factor has not hindered them in the slightest and they are working perfectly well.
Solareye Customer
View Testimonials
The Solareye80 has provided a valuable solution to a section of a cycle path near to the Create Centre – a well used path by commuters in and out of the city – this path was crying out for lighting but to hard-wire would have been too expensive. This simple solution has made such a difference to the path, especially now the evenings are drawing in. We have been studying the performance of the units over the past 6 months and are very impressed.
Solareye Customer
View Testimonials